Every week, I trawl through the weekly tweets to #advancedpractice to bring you the most debated/talked about tweets (with the assistance of some very clever software). Twitter is often full of opinion, so I look at the evidence behind the most talked about topics last week.


This week in #advancedpractice ended with a controversial post from @copperfield curtsy of Pulse - an 'in-depth' monthly magazine for an audience of 43,000 GPs. Yes, a magazine, they won a prize for it in 2014. Welcome to Planet Advanced Nurse Practitioner summaries the experience of a GP following up three patients who received prescriptions for ailments, that @copperfield argues, were not required. This provoked some response and debate from the #advancedpractice community: 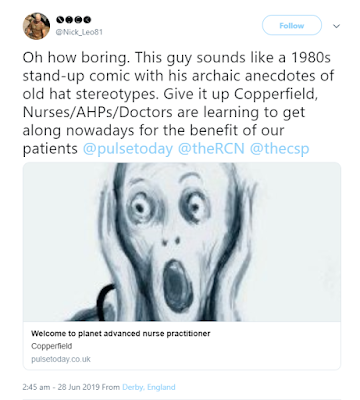 Likewise some interesting comments were seen on pulsetoday.co.uk but I've looked at it so many times I've been locked out. Regardless, only GMC registered doctors can post a comment so there is no scope for healthy debate or opinions from the wider community: 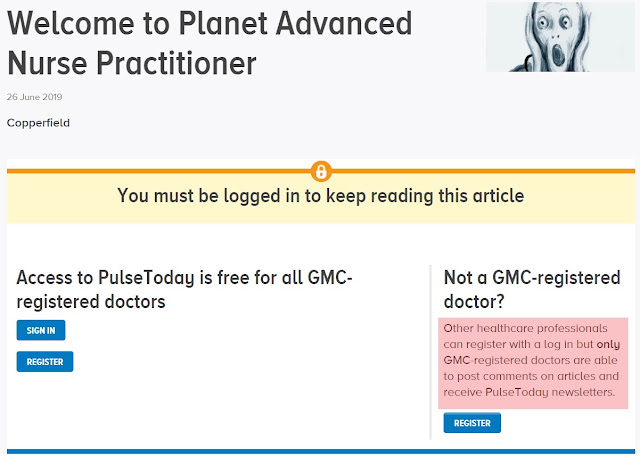 As a side note, this website welcomes comments from all registered professionals, not just NMC or HCPC. Although this is infuriating, this publication offers no evidence to support the claims made. The evidence in favor of ANP's far outweighs the anecdotal opinion supplied by @copperfield. So what is the evidence for ANP's?

The rise of both ANP's and advanced healthcare practitioners in primary care has been due to patients dissatisfaction about the time they had to wait to get an appointment (NHS, 2015). This situation is compounded due to a lack of GP's and early retirement. Nationally, patients are encouraged to seek advice from the most appropriate person or place for their healthcare needs (NHS, 2015). Although, it is important to acknowledge that some individuals may still wish to or even need to see a GP (Noroxe, 2013).

One problem that arises is there is currently no regulation of 'advanced practice' and so technically anyone can call them self an advanced practitioner (Rolfe, 2015). The education of ANP's is an important factor and they are typically educated to master's level and are expected to apply complex critical thinking skills (Paniagua, 2010). However, it is possible that ANPs practice at different levels nationally. Currently, advanced practice remains unregulated and as such there may be disparities both nationally and regionally (Health Education England, 2019). I acknowledged the excellent progress nationally by HEE and others to attempt to 'bring together' advanced practice. I for one hope to see regulation and standards set in the future to enable the title 'advanced' used appropriately in line with the level of practice.

The ANP role has been previously cited as supportive to GPs workload and, for want of a better expression, able to fill some of the gaps caused by shortages (Paniagua, 2010). ANPs can deal with most patients requesting acute appointments and often do not require GP contact at all (Seale, 2005). Likewise, patient satisfaction is often high and the mean consultation time for ANP's in primary care is just over 10 minutes (Barratt, 2016). It is argued that ANP's take time to discuss the treatments and potential side effects while negotiating the social and ethical values of the patient (Barratt, 2016). Arguably, this would appear to be ingrained into the nursing consultation models but very much in agreement with Shared Decision Making (Elwyn et al., 2012). A central tenant of shared decision making is placing the patient at the heart of the decision, this is perhaps why patients are often very satisfied with their consultations involving ANPs.

There may be patients who would still wish to see a GP - of course this opinion must be accepted and facilitated (Noroxe, 2013). On the whole, patients would appear accepting of ANP's if they are made aware of their capabilities and qualifications (Caldow et al., 2006). A true challenge is presented by GP's who may lack confidence in the ANP role but may also feel threatened (Wilson, 2003).  A central element that can overcome challenges and aid integration of ANP's is education and supervision by GP's (Parker et al., 2012). Ongoing education that is facilitated by GP's is essential to ensure patients benefit from the ANP role (McLoughlin et al., 2012). Education is one of the four pillars of advanced practice (HEE, 2019). As such it is important for ANP's to actively question their own practice and continue with professional development throughout their career.

The evidence supports the role of ANPs in primary care, but challenges have been highlighted for those faced with practitioners such as @copperfield. ANP's would appear to add value to primary care, receive good patient feedback and do not necessarily take longer in their consultations. Rather than openly 'trashing' a professional group it would have been more appropriate and professional to offer education and support for those ANP's in question. In my personal experiences as clinician, educator and patient: I have seen some fantastic ANP's and have been very satisfied with my consultation, conversely I have seen less than desirable practice from doctors and other AHPS.

Ultimately, in my opinion I agree with @nick_leo81, we are all in it for the same thing: the best care for our patients so lets stop the trash talk, practice in accordance with evidence and move with the times. Don't judge a profession based one two or three bad experiences, its a chance to educate and improve practice as a whole.

Labels: This week in #advancedpractice 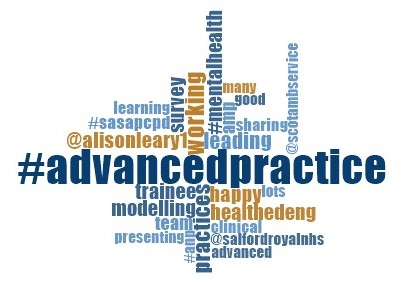